Scott Rankin Running for Braddon with The Local Party

Scott Rankin Running for Braddon with The Local Party

"We live in a community, not an economy."

That is the view of Sisters Beach resident Scott Rankin who is running as a candidate for Braddon with The Local Party at the May 21 federal election.

For 30 years Mr Rankin has been working with young people on the North-West and West Coast as founder of Big hART, a not-for-profit organisation that aims to bring invisible issues to public attention.

"I'm interested in making a bigger impact now and taking Braddon to a bigger table," he said. "We don't live in an economy, we live in a community and I want to see the community being advocated for.

"There's a whole range of social determinants that are indicating that something is not right.

"But we have more roads...we have some infrastructure and those things are good.

"I want to ensure we move beyond the pork-barrelling cycle of roads and rail."

Mr Rankin said while being the Member for Braddon was the ultimate goal there was ways of influencing the region's future other than an outright win.

He is running with The Local Party, which markets itself as a collective of independents.

Mr Rankin said to run under the party's name he had to agree that the First Nation's people needed to be listened to and that climate change was urgent, which are issues he was already passionate about.

Mr Rankin said he believed Liberal MP Gavin Pearce and Labor candidate for Braddon would be "trapped" in their parties.

"They're going to be trapped again in the major parties where you can only do certain things," he said.

"I'm interested in creating a space in between that where real action for those who need it the most can be made.

"It needs to happen outside the major parties because they haven't done a good job." 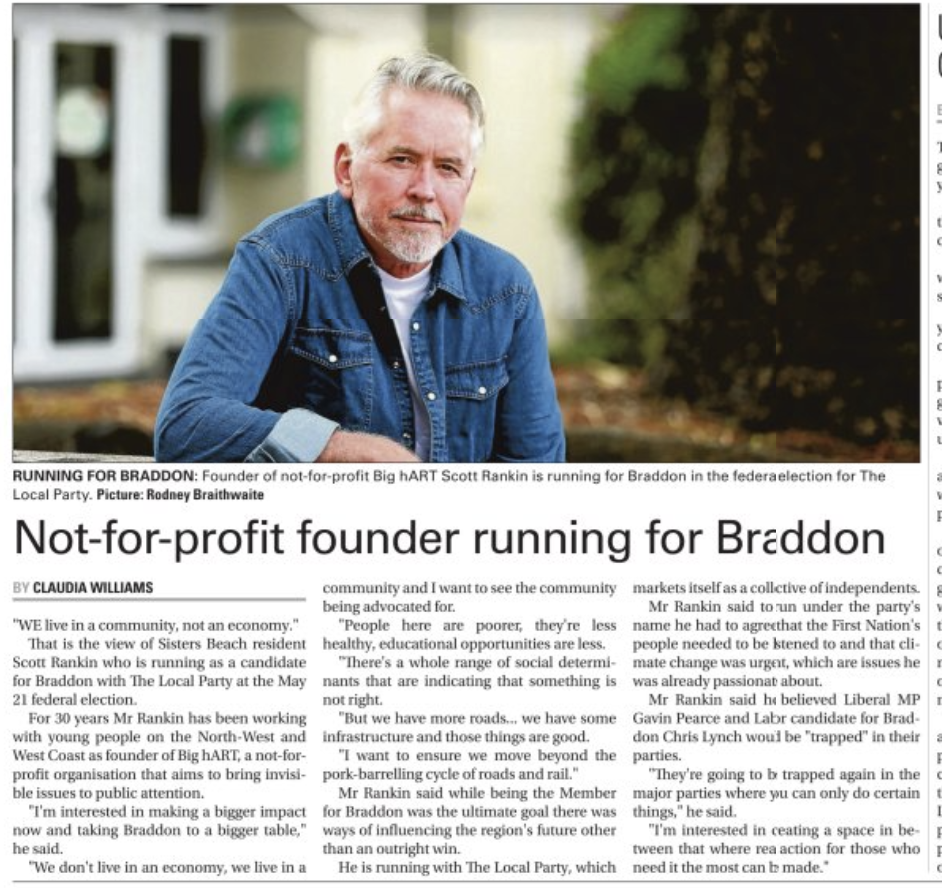 Published here in The Advocate on April 13, 2022. Story by Claudia Williams, Picture by Rodney Braithwaite

Politicians’ loyalties should be to the communities they represent over their own parties, writes Leanne Minshull

Op-Ed: We need a climate disaster fund — paid for by big carbon emitters

Leanne Minshull's Op Ed from February 1, 2020: LEANNE MINSHULL: Taxpayers have already done our bit, now others who contributed to...

Leanne Minshull's Op-Ed from April 9, 2020: LEANNE MINSHULL: Take a tip from New Zealand, where a committee with live...